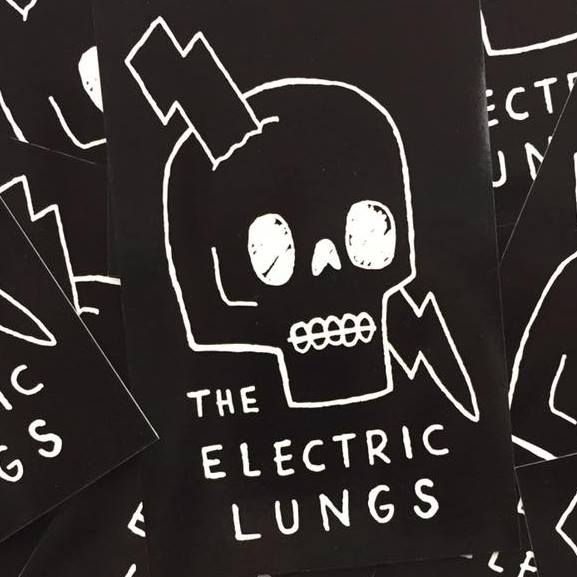 “….And then he died!” The opening line of “He was Alive” opens the door into an unexpected musical adventure by The Electric Lungs. Word-smith and vocalist, Tripp Kirby, weaves elaborate tales not unlike some of the great authors of our time. When these stories are added to the exotic soundtrack provided by Eric Jones, Jason Ulanet, and Marc Bollinger, one is compelled to come along for the journey.
The release of Simplified and Civilized in 2013 thrust The Electric Lungs to the forefront of the Kansas City’s music scene. The electro-punk infused rock of their freshman album was described by Zach Hodson, of TheDeliMagazine.com, as “Sort of like Yes and Black Flag sharing a Bloody Mary at Brian Setzer’s wine mixer.”
The Electric Lungs formed in 2012 with the intent to push the boundaries of musical creation, allowing every song to take on a life of it’s own. There’s a playful contrast exemplified from the dank and dark “Catching Up” from Simplified and Civilized to the piano driven “Play It When You Need It” from Don’t Be Ashamed of the Way You Were Made. From album to album, The Electric Lungs’ cohesive style even makes these distictively different songs sound like siblings.
The Electric Lungs have played a large varity of showcases and festivals because of their musical diversity including: The Folk Alliance International Conference, The Middle of the Map Festival, The Westport Roots Festival, and the Mid-Coast Takeover stage in Austin, Texas.
Late last year, the band signed with Kansas City based Middle Class Records. Recording has recently been completed for their first MCR release and is awaiting mixing and mastering. It is a five song EP consisting of three new songs, an adventurous remake, and a collaboration with singer/songwriter Ven Smith. Slated for a spring release, it’s just the beginning of greater things to come.

“The Electric Lungs are all the things great about rock n’ roll; catchy melodies, driving rhythms, ferocious wailing and pure energy. Mixing good modern punk rock with elements of surf and electronic, The Electric Lungs are in a category all of their own stylistically. For fans of early Weezer, late Devo and Murder by Death.” – Jody Hendrix, Middle Class Records

“The Electric Lungs that I experienced was a fierce, driven band.”-kcfanview.wordpress.com

“The Electric Lungs steamroll through their songs with an abandon that some may call “reckless” but I feel is closer to “playful.” The band seems so excited by the sounds they are able to create that they feel compelled to explore continually their sonic spectrum-an aesthetic that makes them as fun to watch as listen to.”
Brian Clifton – Mills Record Company Blog